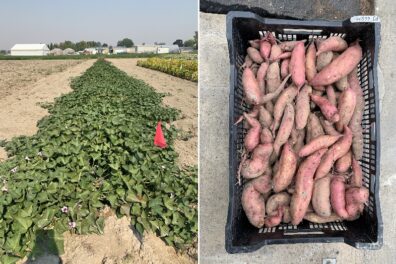 Sweetpotato (Ipomoea batatas) is in the morning glory or Convolvulaceae family is one of the most nutritious root crops as it contains significant amounts of fiber, beta carotene, anthocyanins, phenolics, vitamins, minerals, and other bioactive compounds, depending on the flesh color. Sweetpotato ranks seventh in the world food production after wheat, rice, maize, potato, barley, and cassava. In cool and short growing seasons, research studies show sweetpotato production is promising when grown with plastic mulches.

Sweetpotato trials at WSU Mount Vernon have shown that they can be successfully grown in Northwest Washington with plastic mulches. These reports include our research findings.